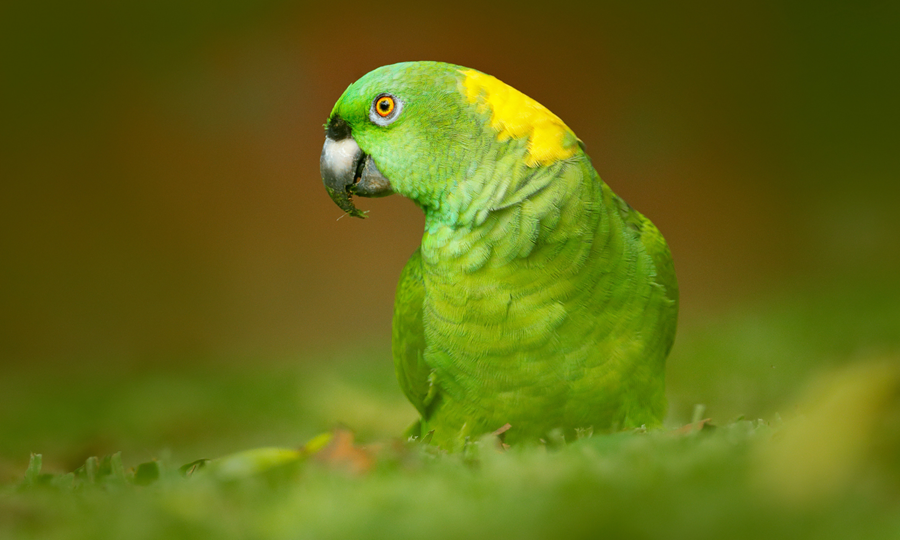 Torn from their parents.

These rare parrots are paying a heavy price for their splendour.

Yellow-naped parrots are stunning birds. With their glorious green and gold-flecked plumage and piercing amber eyes, they really are exquisite. However, it is this beauty, combined with their incredible intelligence and mimicking skill, that has become their downfall.

These charismatic creatures have become a primary target for poachers, sold on to the pet trade at a level that is simply unsustainable. Pet hunters target vulnerable eggs and chicks, poaching up to 100% of nests in some locations. These highly social animals are then locked away, sentenced to a life of solitary confinement.

The reality of such stark cruelty resulting from people wanting to share their homes with these beautiful creatures is heartbreakingly ironic. They have a mere 50% chance of survival when seized from the wild.

But beyond the incessant suffering, their species isn’t coping.

Yellow-naped parrot numbers are thought to have halved in the last decade. Their population is plummeting, yet the plight of these brave birds is largely flying under the radar.

This doesn’t just affect the birds themselves. This illicit capture and trafficking has a terrifying knock-on effect on the surrounding ecosystem; yellow-naped parrots perform a valuable role as seed dispersers for many native fruit trees so they are crucial to the health of these tropical forests they call home.

Unless we intervene now, this downward spiral will soon end in disaster.

So, through your support, FFI is working hard with local communities to build support for the protection of the parrots. We are establishing a network of guardians and setting up patrols in key locations to prevent poaching and monitor populations, offering incentive payments to protect nests.

This work is a great step towards changing mindsets and attitudes around such a deeply ingrained cultural norm, and the long-term protection of these birds will ultimately hinge on reducing the demand.

With your help and donations, we can continue this work and stop this trade for good, helping yellow-naped parrots to flourish in the wild once more.

Please help save yellow-naped parrots. If everyone reading this donates just £3, you could help provide vital funds to incentivise locals to protect these birds, keeping them free and thriving. Thank you.